Pharmageddon: how America got hooked on killer prescription drugs 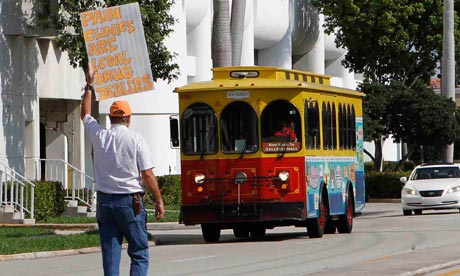 A man protests against pill mills in Fort Lauderdale. 98% of doctors who prescribe oxycodone work in Florida, and Americans travel far to get the drug - many arriving on the 'Oxycodone Express'. Photograph: Alan Diaz/AP

The Kentucky number plate on Chad's pick-up truck, parked round the back of a doctor's clinic in Palm Beach, Florida, reveals that he has just driven a thousand miles, 16 hours overnight, to be here - and he's not come for the surfing.

"It's my back," he says, rubbing his lower vertebrae. "I'm a builder. I fell off the roof and hurt my back."

That's odd, as we have just watched him run out of the clinic and over to his truck without so much as a limp. He's clutching a prescription for 180 30mg doses of the painkiller oxycodone.

Chad is one of thousands of "pillbillies" who descend on Florida every year from across the south and east coasts of America. Some come in trucks bearing telltale number plates from Kentucky, Georgia, Tennessee, even far-away Ohio. Others come by the busload on the apocryphally named Oxycodone Express.

For Chad the profits are handsome too. He will spend $720 at a pharmacy on his 180 pills, giving him a total outlay of about $1,000. Back in Kentucky he can sell each pill for $30, giving them a street value of $5,400 and Chad a clear profit of more than $4,000. If he goes to 10 pill mills in Palm Beach on this one trip he could multiply that windfall tenfold. But then there's the other cost of the oxycodone trade, a cost that is less often talked about, certainly not by Chad or his accommodating doctor.

Every day in Florida seven people die having overdosed on prescriptiondrugs - 2,531 died in 2009 alone. That statistic is replicated across the US, where almost 30,000 people died last year from abusing pharmaceutical pills.

It's an American catastrophe that has been dubbed pharmageddon, though it rarely pierces the public consciousness. Occasionally a celebrity overdose will attract attention - Anna Nicole Smith, Heath Ledger, Michael Jackson - but they are specks in a growing mountain of human mortality.

Declaring the trend an "alarming public health crisis", it pointed out that people were dying unintentionally from painkiller overdoses at rates that exceeded the crack cocaine epidemic of the 1980s and the black tar heroin epidemic of the 1970s combined.

At the heart of the disaster is the powerfully addictive painkiller oxycodone, which comes in various brands - OxyContin, Roxicodone and Percocet. It is a legitimate therapy for those in great pain but has spawned a generation of addicts and, in turn, attracted crooked doctors who massively expanded the prescription of the drugs in up to 200 pill mills, most in southern Florida.

The epidemic has affected people of all ages but is becoming more prominent among teenagers and young adults.

Ric Bradsaw, the sheriff in Palm Beach, said: "There's a culture that's taking hold among teenagers that because a doctor prescribes these pills they can't be bad. Kids don't have the fear of pharmaceuticals that they do of illegal drugs."

Eleanor Hernandez was introduced to "oxies" when she was 14. "I had no idea it was dangerous at all. Other people were taking it for pain, so why would I worry about it?"

Her mother had just died and Hernandez found that she felt care-free when she took a pill. "It took the pain away, of my mother's death, and physically too. It numbed you, made you feel like you were in a bubble."

By 15 Hernandez was selling oxycodone from the park across the street, making money to pay for her own habit. It was a downward spiral. She was in and out of rehabilitation clinics, in and out of custody. Then she overdosed twice and was resuscitated both times in hospital.

But Hernandez was one of the lucky ones. Now 20, she works in a treatment centre helping 14 to 17-year-olds beat addiction. "To this day I thank God that I found help because if I hadn't I probably wouldn't be here."

Rich Perry did not find help. He died aged 21 from a cocktail of oxycodone and other prescription and illegal drugs. He began taking prescription pills three years previously, in his last year at high school. He confided in his mother, Karen, that he had a drug problem and went into rehab.

He was clean for a year, but then, without his parents realising, he relapsed, obtaining oxycodone from three separate doctors. He overdosed once but carried on using the drug. The first Karen knew that her son had gone back to the pills was when two officers knocked at her door at 2am to tell her he was dead.

Now, like Hernandez, Perry seeks solace by helping others to avoid her son's fate. She runs the Florida group Narcotics Overdose Prevention and Education - Nope. Together with the American Society of Interventional Pain Physicians it is battling to persuade the state to introduce a monitoring database that would allow police and medical authorities to identify where the oxycodone is coming from, and in turn identify and shut down the pill mills. Though Florida is the epicentre of the oxycodone epidemic, with 98% of all the nation's doctors who handle the drug located here, astonishingly the state has no comprehensive database recording prescription histories.

Even more astonishingly its recently elected governor, the Tea Party favourite Rick Scott, has blocked the introduction of a database on grounds of cost.

That makes Perry see red. "Cost! For heaven's sake! What is the cost of a human life?"

The police are even more baffled. They point out that Florida's lack of regulation has allowed the pill mills to flourish.

Eric Coleman, a narcotics detective in Palm Beach, said the true cost of Florida's oxycodone disaster would surpass that of the database many times over if all costs related to the crisis - state subsidies for prescriptions, policing and incarceration of addicts, hospital visits for those who overdose, autopsies and paupers' burials for the dead - were added up.

The Palm Beach police force has many of the pill mills under surveillance and is steadily shutting them down. Over the past year 33 healthcare professionals have been arrested in Palm Beach alone and several have had their medical licences revoked.

Yet the police know that until a proper monitoring system is in place, the clampdown they are carrying out will only displace the problem. Pill mills are popping up in other parts of Florida, around Tampa and Orlando, as pill mill doctors move to new pastures.

"This crisis is going to get worse before it gets better," Coleman says. "It's heartbreaking to watch all the families ripped apart, the young lives ended, the damage these doctors - that honourable, esteemed profession that we trust to look after us - are leaving behind."

Bestsellers from the Guardian shop

Find the latest jobs in your sector:

How the Tea Party wins even if it loses

Anne Daguerre: Republicans fear a backlash if conservatives force a government shutdown. But in the long run, Democrats have most to lose

Stewart J Lawrence: The Indiana governor may ride a Harley, but he's the sort of sober moderate the GOP should back if it wants to win in 2012